Skiving cutting for gears, invented over 100 years ago, is being widely noticed for internal gear production. Although effective for the cutting of internal gears with high accuracy, issues with tool life has limited its use.

The usual skiving cutting uses gear-shaped tools and uses the same teeth for roughing and finish cutting. The newly developed cutting method uses specially designed tools with separate teeth for rough and finish cutting for greatly extended tool life. Powerful simulation software was developed to aid in the design of the tools and cutting conditions. Together with the newly developed machine to take advantage of the new tool, we were able to achieve tool life of more than five times greater than conventional tools with same accuracy and efficiency.

Conventional skiving cutting works with the workpiece and tool rotating in synchronized motion. The tool is at a crossed axis, and three to six (or more) cutting passes are used with the cutting depth changed (Fig. 1). Tools are called pinion cutters, and only one tooth is used at one internal gear space.

The new process uses a new tool as per Fig. 2. This tool uses three cutting teeth for one internal gear space, and by increasing the number of teeth, the tool life is extended. Since the new tool has a more complicated shape and multiple teeth effects the cutting, we developed software to simulate the best tool specification and cutting conditions. Figure 3 shows an example of tool wear estimation. Tool wear in black is shown at seven teeth with different shapes.

An example of cutting automobile transmission gears is shown in Fig. 4. Compared with the tool life of previous skiving cutting method of 200 parts, we achieved 1,200 parts – six times more. 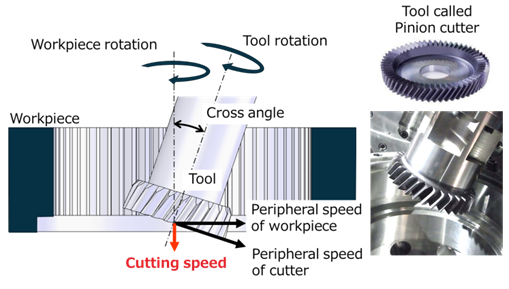 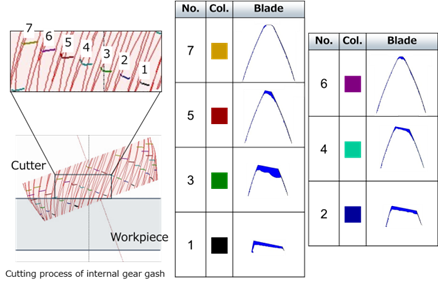 By developing a method to cut internal gear with high accuracy and efficiency, the challenge to extend tool life has been overcome and became practical. We will continue further research of cutter material and coatings to further reduce tool costs.