Traffic fatalities occur most frequently at dusk when visibility begins to decrease after sunset, about four times more than in the daytime. Research has shown that 56% of accidents between vehicles and pedestrians could have been avoided if the headlamps had been set to the high beam, indicating that improving visibility for drivers is the key to reducing traffic accidents.

In this context, vehicles have begun to be equipped with Adaptive Driving Beams (ADB), a variable light distribution technology that, while the high beams are on, automatically shields part of the light distribution pattern of illumination ahead so as to avoid causing glare for preceding or oncoming vehicles. (Fig. 1) 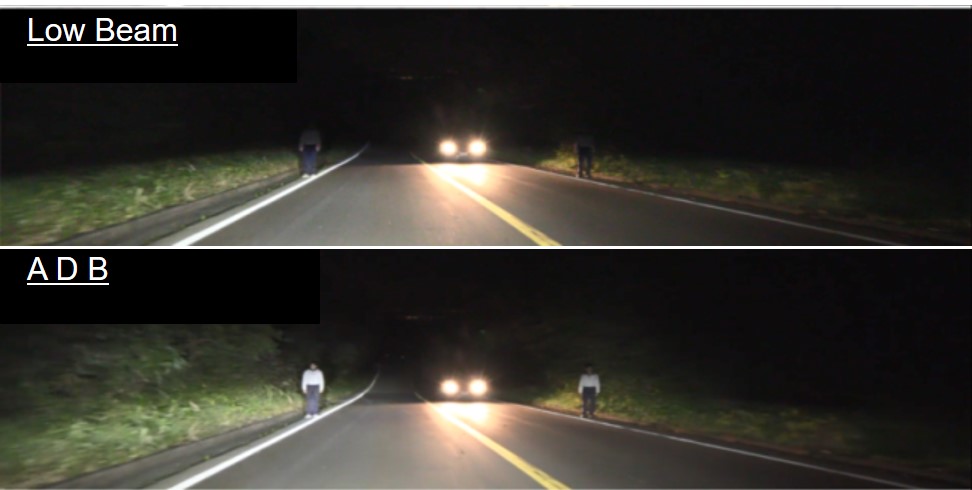 Figure 1: Improvement of visibility with ADB (compared with simple low beams in the same situation)

The main type of existing ADBs switches on and off part of multiple LEDs placed in the lamp to form desired illumination patterns. This method, however, requires the same number of LEDs as the number of desired divisions to illuminate the target areas; increasing the number of divisions to create finer patterns and improve performance requires more LEDs and a larger internal unit, which would raise the cost and limit the spread of ADBs.

To solve this problem, we have developed and mass-produced new type of ADB, the world’s first that smoothly adapts to constantly changing driving situations by laterally scanning the LED light at high speed while reducing the cost with fewer LEDs.

2-1 How it forms a light distribution by scanning
In the light scanning ADB, which we call BladeScan®,LED beams are cast onto two rotating spiral reflectors called blades that reflect them as scanned light distribution patterns (Fig. 2). 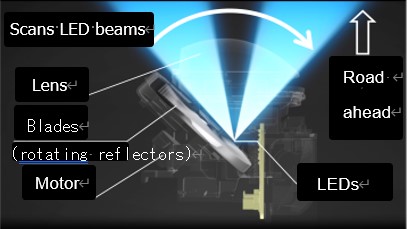 The main feature of this system is that, by synchronizing the rotation phase of the blades directly connected to the motor with the turning on and off of the LEDs, the system can distribute the scanned light only to the targeted areas and that, by gradually changing the timing of the flickering LEDs, the illumination of the target areas can be expanded, reduced, or moved freely and smoothly. Using only 12 LEDs, the system attains the same fineness as an arrangement of 300 LEDs. This enables the driver to promptly spot pedestrians walking on the roadside while driving at night (Fig. 3).

2-2 Development of a highly durable, compact motor
The motor is the core component of the BladeScan® ADB unit. To address three technical issues, namely resistance to the environment where the motor is used, flickering performance, and long-term reliability, we set target specifications for high heat resistance, high-speed rotation, and high durability best adapted to the onboard motor. As we began to develop the unit, there were no sufficiently small motors on the market that met these specifications, so we had to develop it from scratch. One of the most difficult tasks was to achieve high durability. Even the slightest vibration while the motor rotated would damage the bearings that supported the rotating body and the damage would accumulate over time, so we identified all possible causes of vibration, not only mechanical but also magnetic, and drastically reduced those factors. As a result, we managed to satisfy all the target specifications with a tiny, low-cost motor of approx. Φ20 mm and established the technology for ADB by scanning.

2.3 Effects of BladeScan® on reducing traffic accidents
An analysis using a virtual traffic simulator revealed that, compared to using low beams, conventional ADBs reduced traffic accidents by 81% and the BladeScan® ADB by 94%. Thus, even with the same ADB, increasing the number of light distribution divisions leads to a further reduction in traffic accidents.

Automotive headlamps are not only important for the aesthetic design of a vehicle, but also a critical safety component that greatly contributes to improved safety.
We hope that the new ADB technology we have developed and mass-produced as BladeScan® products, which was inspired by the idea of shuffling the light distribution with a tiny motor, will help improve visibility for drivers and reduce traffic accidents.