Foundation and activities of the JSME International Union

The JSME International Union (JSME-IU) was founded in March 2016 with the aim of creating a community of foreign students and engineers and strengthening globalization of the JSME. As European and American academic societies expand internationally, JSME also needs to become a society which can function as an information hub where the latest information in fields of interest are collected from all over the world and broadcast globally. Currently, there are approximately 500 foreign members in this society, which seems a large number, but in fact only represents 1.7%. Such a small percentage seems to indicate that this society does not appeal to foreign engineers. Additionally, though until now this society mainly carried out international exchange through international conferences, it now strongly intends to change and stimulate international activities by first providing a community to foreign members. With this purpose in mind, Chairman Azuhata, Vice-Chairman Kishimoto, Membership Committee President Kazao and International Cooperation Chairman Otake suggested the creation of “JSME International Union (JSME-IU)”, which was consequently founded in 2015.

The JSME globalization symposium was held in response to the foundation of the JSME-IU. This symposium was held as a joint project of the membership group and the international collaboration committee. This symposium, which was the first trial and was dedicated to globalization, was held together with the Kanto branch conference and lecture meeting at the Tokyo Institute of Technology in March 2016, and 27 foreign students and researchers attended. In his speech, Chairman Azuhata gave his vision for the future of JSME-IU, talking about what JSME-IU is aiming for and the necessity of globalization. In the following special lecture, Director Kazao Yukihiko explained, based on detailed data, the type of foreign students sought by Japanese companies. In the subsequent panel discussion, ① job hunting for foreign students and ② invisible barriers in Japan (mainly the language barrier) were discussed, and participants shared their feeling that it is essential to cherish individual relationships in order to overcome barriers in society.

Finally, in September 2017, the 3rd symposium was held in Saitama University and 36 foreign students attended. Nakahata Hidenobu (Hitachi, Ltd. Managing Executive Officer, CHRO and Human Resources General Manager) was invited as a keynote lecturer. Focusing on global corporations, he introduced the standardization of human resource development and management at branch offices in different countries, described how diversity was implemented by active promotion of foreigners and women to officer and manager positions, and talked about expectations regarding foreign students. Former foreign students then gave lectures introducing their motivation to study in Japan, the reasons for choosing a Japanese company and what they struggled with after starting their work at the company. During the discussion, one lecturer was asked sharp questions about the reasons he moved from a company to academia and, after a bit of confusion, he replied and the discussion livened up.

The JSME-IU, as a community of foreign members, will continue to engage in diverse activities such as the holding of similar events. 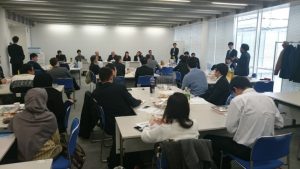 A view from the 1st Symposium on Globalization

A view from the 2nd Symposium for Foreign Students 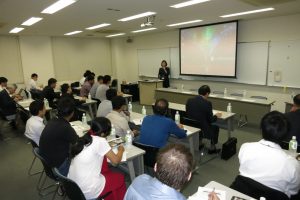 A view from the 3rd Symposium for Foreign Students