It is necessary to reduce the costs continuously in the market of manufacturing, especially that for automobiles. There are some methods for reducing costs, such as reduction of processing time, integration of machining process, improvement of productivity per unit area by miniaturizing of machines, and so on. To realize these orders, the method of skiving shown in Fig.1 that achieves a high quality surface finishing by peeling the surface of the parts with high speed feeding is attracting attention.

Although the methods of skiving was established a few decade ago, it wasn’t put into practical use because of the difficulty of the ordered machine specifications at the time. Recent technical development makes the skiving realizable method for the limited large machine tools for milling.

We developed the specialized machine “SKV-8”, shown in Fig.2, with ordered specification for skiving in the compact size to make it commercial use. 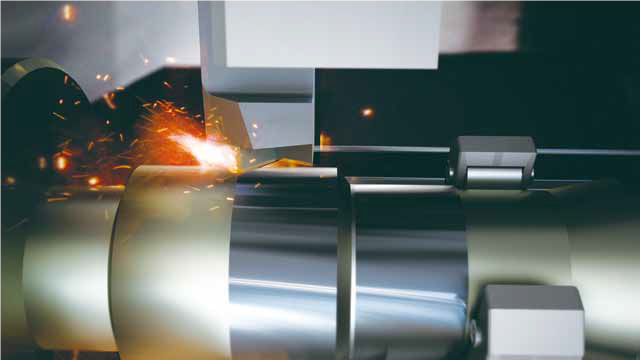 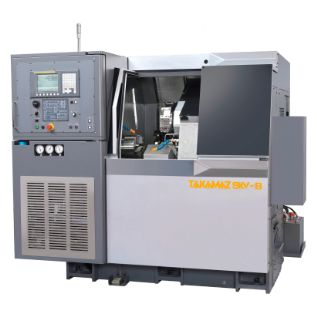 2. Target parts for skiving and the effects of SKV-8 installation

Many of the automobile parts described above are the shaft shape, hardened by quenching, and used for sealing part. Almost of them are processed by hard-turning, turning for the hardness parts, and grinding to banish tool marks of turning that breaks the sealing. The introduction of skiving into the process realizes the reduction processing time as shown in Fig.3. In case with replaceable grinding process into skiving, it can be achieved the improvement of productivity by the reduction of machine tools.

Although the turning processes at the tip of tool, the skiving processes at the edge-line of tool. It causes increasing of cutting resistance – thrust force in skiving reaches about 4 times of that in turning. Thus, in case of processing integration such as grinding after turning, it is necessary to achieve a high accuracy finishing. It is also necessary to prepare for the possibility of fires caused by the contact with lubrication oil and scattered hot-chip.

To solve these demands described above, SKV-8 has 3 technical features as followed

To resist the cutting force of skiving, the high-powered spindle unit with larger bearing size than conventional lathes is adopted.

SKV-8 also has the rigid bed with enough thickness at frame part and properly rib-arrangement analyzed by FEM. In the bed, there is the cooling system for the thermal deformation.

In addition, SKV-8 has the newly developed built-in tailstock to resist the axial force for the cutting with driving-center as standard equipment.

At the slides of X and Y axes, which are cutting and feeding directions for skiving, it is adopted the hybrid slideway of inverted V shape type with great straightness and rigid square type.

As described above, the hot chips caused by skiving have possibility of fires. To prepare the problem, SKV-8 includes auto fire-extinguisher system for fire appearance and auto coolant system functioning under flammable condition in use as standard equipment.

The confirmed sales of SKV-8 has been 5 until December in 2018, most of them has sold to major automobile makers in Japan. We think that the process of skiving is still in the developing stage for commercial use because of the cutting offers. We expect that our proposal cutting methods for them will increase the sales of SKV-8.

Development of SKV-8 realized the skiving at compact machine. We hope that prevalence of skiving with SKV-8 will help the development of manufacturing market in future.