The Activity of Robotics and Mechatronics Division in the JSME 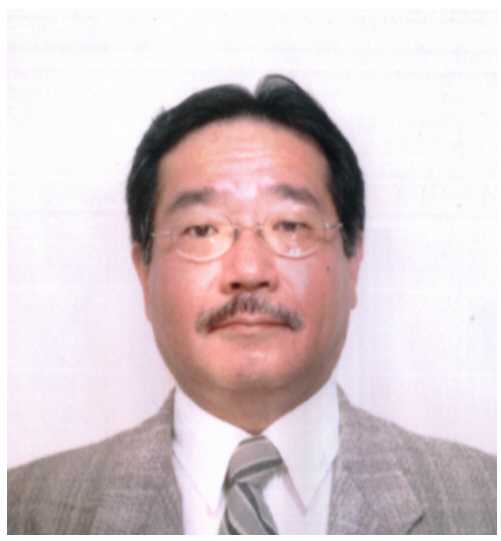 RMD has about 5,600 registered members. It is the fifth place in 20 divisions in JSME. The statistics of the recent annual conferences of RMD (ROBOMEC), however, shows that it has around 600 paper submissions and more than 1000 participants and they are still growing. These numbers shows that RMD is highly activated year by year.
The ROBOMEC conference is operated in the style of full poster-session. The sessions cover from the elements such as sensors and actuators, to integration such as system software, application systems and the psychological aspect in human-robot interactions.
The recent topics are non-industrial applications of RT such as humanoids, entertainment robots, medical and welfare applications, and field applications. The numbers of papers related above topics in recent ROBOMEC are shown in Table 1. 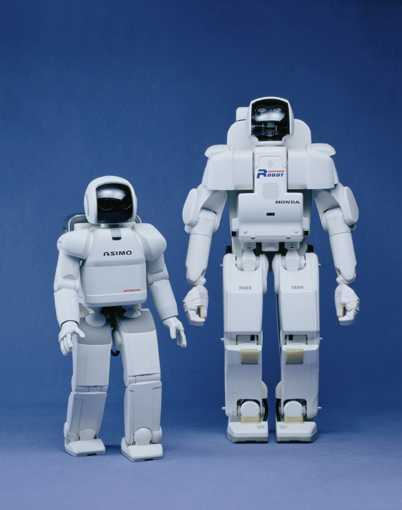 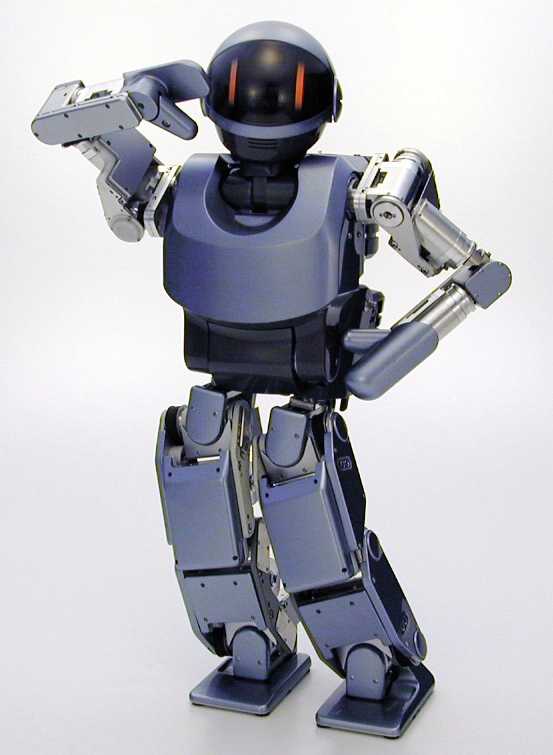 The latest releases of humanoids of ASHIMO from HONDA and SDR3X from SONY are shown in Fig.1. The details are stated in the articles on humanoids, medical and welfare applications prepared in this issue.
The innovation of 2001 in the field robotics is a paradigm shift that robots are not simple autonomous mechanical systems having many degrees of freedom of motion, but are to be applied to the future social infrastructure as an indispensable technological component. Another important stream is that ordinary people have become paying attention to the future social contribution of robots originating in the recent robot fashion.
The accident of JCO in 1999 let the society realize the necessity of emergency response robots operable and sufficient accumulation of know-how and utilization technologies for practical field robots. However such accumulation is insufficient because robotic systems of social infrastructure have not continuously ordered nor developed in Japan. This suggests an appropriate future direction of promotion of research and development in this field.
According the Ottawa agreement in 1997 of prohibition of personal land mines, Japan decided an international aid 100 million yen in 5 years, and support for R&D of
humanitarian land mine removal technologies have started. The important technological components are land mine sensing, mobility on natural ground and mine
removal, to which robotics can contribute. 5 papers in ROBOMEC’00 and 6 in ICRA2000 (IEEE Robotics & Automation Conference) were presented, and future development and application in practice are expected. 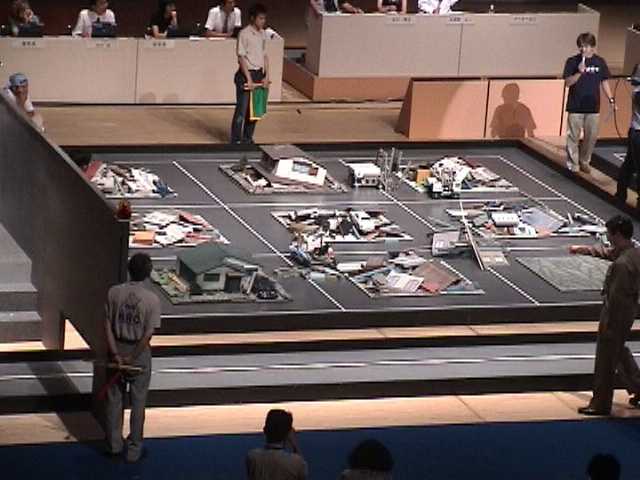 R&D of rescue robots increased with JSME RC-150 TC until 1999 as a trigger, and 9 papers in ROBOMEC’00 and 10 in ICRA2000 were presented. RoboCupRescue started as an international cooperative research project of system integration of synthetic information technologies and robotics including information collection, prediction,
distribution, human decision support, and disaster rescue-aid robots and systems with proposing a concept of future infrastructure for social robustness against disasters. The Rescue Robot Contest (Fig.2) started to contribute not only to robotics-mechatronics education but also to promotion of humanitarian R&D and to exposure to the public society. 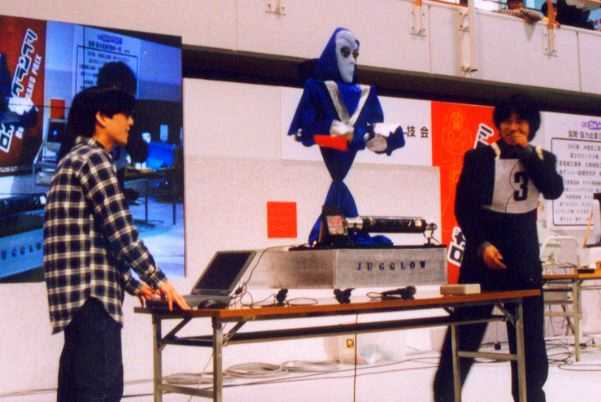 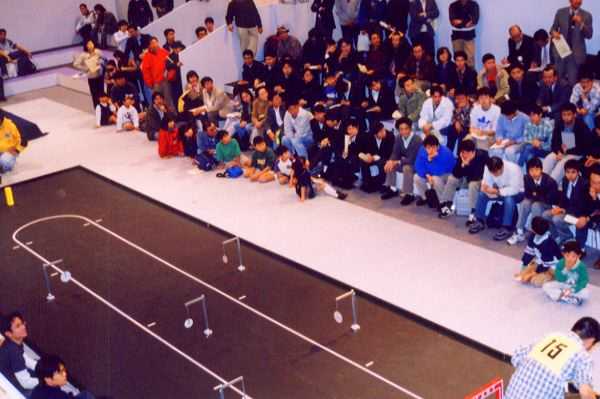 The first Robot Grand Prix was held in Tokyo in August 1997, as the commemorating event for the centennial anniversary of the JSME. After this, RMD operate the Robot Grand Prix. The purpose of the event is to promote the advancement of mechanical engineering among young people and to develop human resources for the productive 21st century. The 5th Robot Grand Prix in 2001, following four categories of competition are being held.
Competition A

In this article, the intensive activities of RMD are introduced. I convince that the Robotics and Mechatronics will be key technologies of novel mechanical engineering in the future. 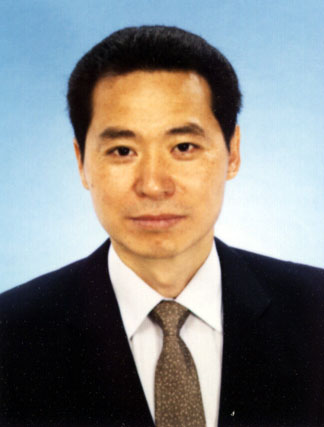 Human beings have been long dreaming about artificial objects that look like and act like themselves. Robot manipulators with vision capability and some artificial intelligence may be such examples. Biped humanoid robots are not simply a dream that human beings have had, but also useful tools simply because they could coexist with their creators without any costly modification to the environment created by and for human beings. For example, they could take an elevator and an escalator, and walk on stairway, and stroll through a narrow corridor along with humans. However, in order for robots to be truly “human-look-a-like”, they should be able to walk with two legs.
Waseda University has been one of the leading research sites for anthropomorphic robots since the late Prof. Ichiro Kato and his colleagues started the WABOT (WAseda roBOT) project in 1970. Since then, by integrating the latest key technologies, we have developed the biped humanoid robots including WABOT-1 (WAseda roBOT-1) that is the first full-scale human-like robot made in 1973, WL (Waseda Leg) robots and WABIAN (WAseda BIped humANoid) in 1997. In these researches, a lot of fundamental technologies capable of coexisting with human beings have been created.

II. Hardware of A Biped Robot

Our researches on biped walking have been aimed at understanding a human’s walking mechanism and building a human-like walking robot. A biped humanoid robot with a human configuration, WABIAN-RII (WAseda BIped humANoid robot-Revised II), was constructed in 2000. It has a total of forty-three mechanical degrees of freedom (DOF); two six DOF legs, two ten DOF arms, a four DOF neck, four DOF in the eyes and a torso with a three DOF waist. Its height and weight are about 1.84[m] and 127[kg], respectively. This biped robot mainly employs Duralumin, GIGAS and CFRP as structural materials. The computer system is mounted on the back of the waist and the servo driver modules are mounted on the upper part of the trunk. The external connection is only an electric power source. Two force/torque sensors are attached on the ankles to measure ground reaction forces. Two tracking visions are used to mimic some of capabilities of the human visual system. Also, an auditory system is employed to recognize a human’s voice.

A biped walking control was proposed, based on ZMP (Zero Moment Point) that is a point where the total forces and moments acting on the biped-walking robot are zero. For improved walking stability, a new walking control algorithm was developed which compensates for the moments generated by the motion of the lower-limbs. Therefore, the dynamic stable walking was realized under unknown external forces [1]. To adapt to human living environments, the walking control method based on a virtual surface was introduced which could deal with even and uneven terrain [2]. Also, we have studied the physical interaction between a human and a biped humanoid robot based on various action models [3]. The biped walking by the auditory and visual information has been realized. Figure 1 shows a cut of a scene of an emotional walking experiment.

In near future, humanoid robots will work together with human partners in our living environment, and share the same working space and experience the same thinking and behavior patterns as a human being. Also, The robots will integrate information from sensors and show coordinated actions that realize a high level of communication with a human without any special training using multimedia such speech, facial expression and body movement. In order to promote research activities which aim to construct a new relationship humans and machines in the advanced information society, Waseda University established the Humanoid Robotics Institute in April 2000. So, we will open the door for researchers from both inside and outside of university to serve not only the academic and industry worlds but also society as a whole.

Walking chair as a welfare robot 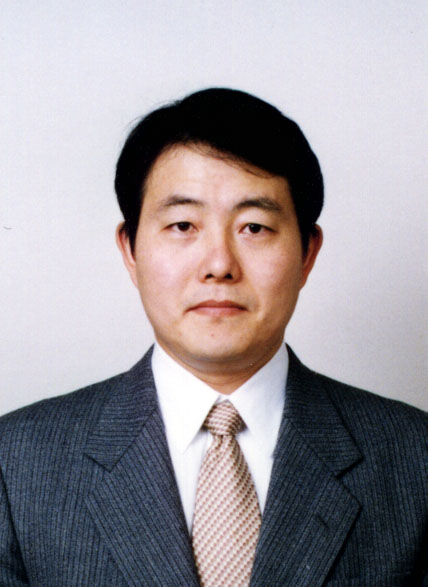 The walking chair is a self-contained vehicle with legs that enables a person who cannot walk by himself / herself to move freely on the terrain in our life space such as horizontal planes, slopes and stairs with unevenness such as minute steps and undulations. For such a purpose of the walking chair, its mechanism and control algorithm should be constructed with consideration of simplicity, reliability, compactness and lightness. The authors have been studying about mechanisms and control of the walking chair as a welfare robot for more than fifteen years. In the first decade, our study was focused on the synthesis and control of the leg mechanism from the point of view of kinematics and statics, and their effectiveness was confirmed through experiments by means of some prototype walking chairs. After that, in order to realize a lightweight practical walking chair, we have been involved in the design of the leg through dynamics simulations, development of lightweight machine elements (a brake driven by a PZT actuator), design and manufacturing of the leg parts for lightening, and mechanism and control of power assisting system.

The composition of the synthesized leg mechanism of the walking chair is shown in Fig.1. Type and dimensional syntheses of the leg mechanism and design of the fundamental control system have been carried out with consideration of energy efficiency, adaptability to unevenness of the terrain, geometric and static condition during walking on stairs, etc (1). A planar closed-loop four-bar approximate-straight-line mechanism (J1J2J3J4J5) generates the fundamental leg motion by driving the crank J2 at a constant speed. Therefore, small input torque and input energy is required at the crank J2 to propel the walking chair and the walking chair can keep stable posture even when the power source is break down. Adjusting motion with two degrees of freedom that is given at the Joint J8 is combined with this motion for generating other leg motions for slopes, large steps and stairs. The feet attached to the legs can swing around the ankle and passively adapt themselves to the unevenness of the terrain. For this adaptation, quite a simple control algorithm was developed and adopted which utilizes only the state (lock/free) control of the brake installed at each ankle according to the information of the contact state between the foot and the ground. By means of this composition of the leg mechanism, the power assisting system that is composed of the human arm and an actuator driven by a battery can be constructed by equipping a power transmission device with two inputs and one output in terms of the hardware composition. 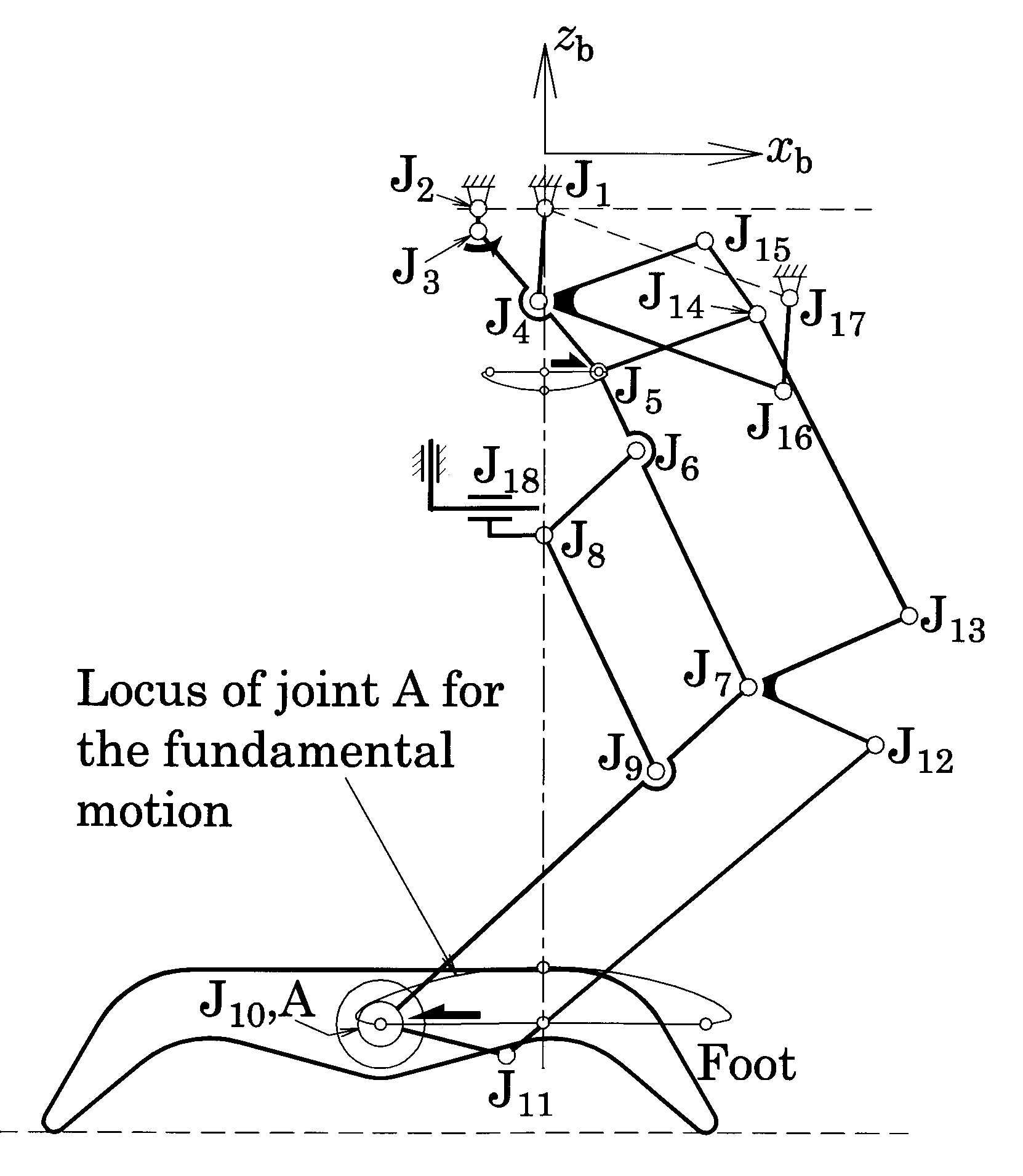 Fig.1 Composition of the Leg Mechanism 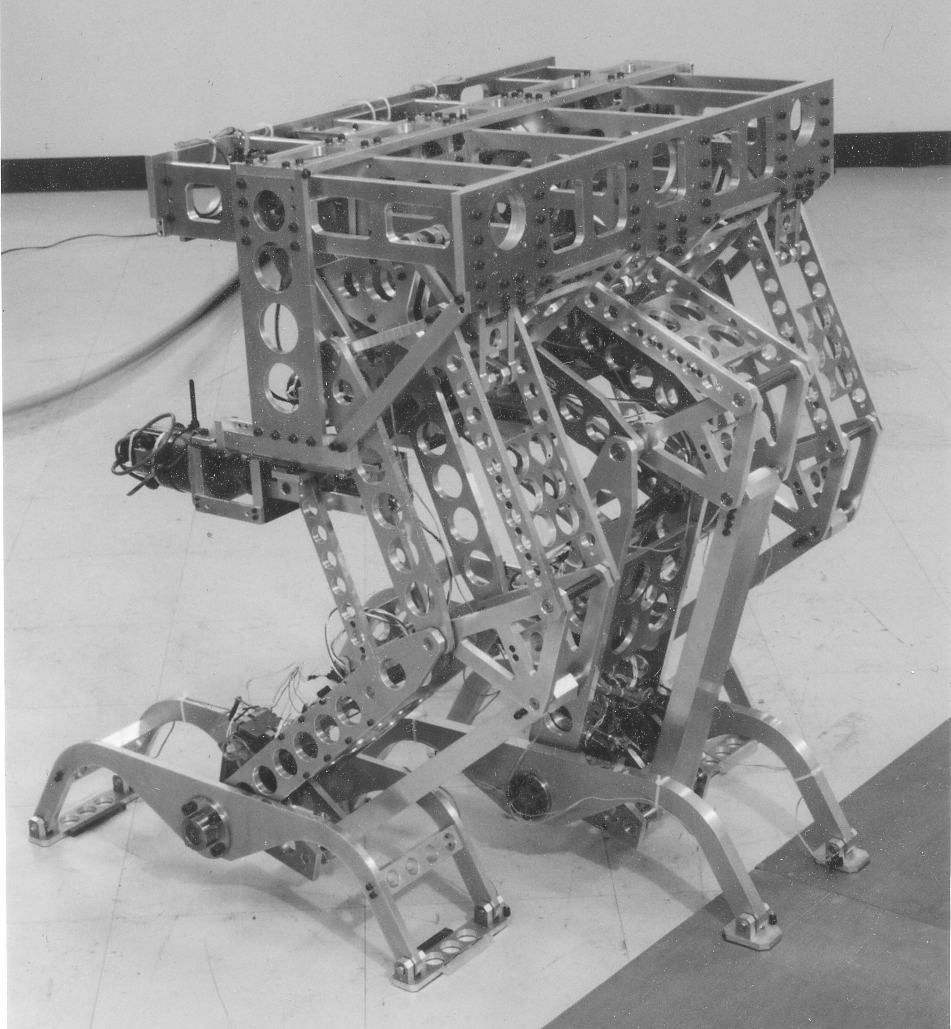 We investigated the minimum stiffness required to the leg for realizing stable walking through dynamics simulations evaluating the attitude angle of the main body, foot contact forces and driving torque of the leg mechanism. Based on the result, we designed and manufactured a prototype walking chair as shown in Fig.2. A lightweight brake driven by a PZT actuator that was originally designed and manufactured in our laboratory was installed in this prototype. The prototype weighs 88 kg and realized a stable walking at 30 steps/min (step length =300mm) on a floor with random steps whose height is 10mm while keeping the attitude angle of the main body within [-2,2] deg.