Luxury cruise trains and sightseeing express trains have been highly regarded in Japan lately. These trains are expected to use both main and secondary railway lines on the network. Given that track maintenance criteria on secondary lines are not as high as for mainline, they tend to suffer from a relatively higher degree of track irregularity than main lines. As a result, rigid-body-mode vibrations, and in particular those in the 1-2Hz frequency range, tend to increase, which may result in reduced ride comfort. Raising maintenance criteria simply to cater for high-end luxury vehicles would be difficult, given the cost and other constraints of such a measure. Consequently, there was a strong desire to reduce this vibration problem using an on-board solution. We therefore developed a vertical vibration suppression system for railway vehicles, and achieved the practical use of it.

Figure 1 shows the overall structure of the system. Variable vertical dampers, used for damping control, are mounted parallel to the secondary (air) springs, shown in Fig. 2. Each car is equipped with four dampers, a controller, and four accelerometers. The controller separates the vertical vibration accelerations of the car body obtained from accelerometers into bouncing, pitching, rolling and bending modes components. The desired damping force is calculated for each component, and supplies a command current to the dampers. The dampers are controlled mainly to suppress the rigid-body-mode vibration of the car body, and additionally to suppress the bending-mode vibration of one.

The vehicle running tests show that the system can reduce vertical bending mode vibrations around 10Hz as well as rigid-body-mode vibrations around 1 to 2 Hz (Fig. 3). As a result, LT, which is a representative index for evaluating the ride comfort of railway vehicles in Japan, was reduced by 3.2 dB. Since differences of 3-5 dB in LT can be perceived by passengers, our system suppressed vibration by an amount that passengers can perceive. 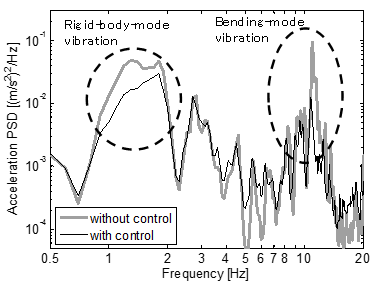 The sightseeing limited express “Ibusuki no Tamatebako”, provided by Kyushu railway company, was the first vehicle to be equipped with this system in March 2011. After that, the system was adopted for some other sightseeing trains such as “Yufuin no Mori”, and all of the “cruise trains” in Japan: “Seven stars in Kyushu” by Kyushu Railway Company,  “TRAIN SUITE Shiki-shima” by East Japan Railway Company, “Twilight Express Mizu-kaze” by West Japan Railway Company (Fig. 4). The system has contributed to improve ride comfort of these luxury trains. 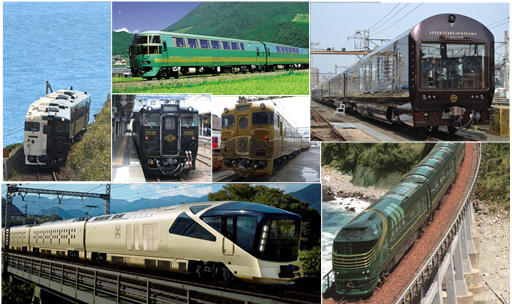 We developed the vibration suppression system using variable hydraulic vertical dampers for railway vehicles, and achieved the practical use of it. Particular thanks are expressed to the relevant personnel at railway companies, who provided valuable assistance and made it possible to carry out the vehicle running tests.