A wearable and compact walking assistance device RE-Gait® for paralytic by collaborating medical-engineering and academic-industry was developed as a practical product as shown in Fig.1. By utilizing the muscle structure and physiological phenomenon of the human, RE-Gait® can induce raising the foot only assisting the ankle joint motion. This device is very compact, enable to be hidden in the pants, and the weight is only 1kg. Furthermore, we also developed the tablet software which can tune RE-Gait® easily by medical doctors or physical therapists in a hospital and a care home. RE-Gait® is already used in many hospitals and care home, and so many patients improve their walking gait. 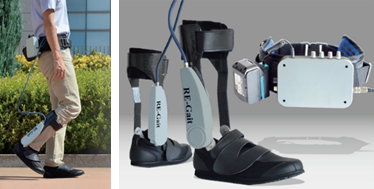 There are so many over 1 million paralytic patients in Japan. Most of them have some features of walking; extending the toe of the foot and circumductive foot, etc. and it is dangerous because it is easy to stumble with a slight step. They have to train to improve and recover their gait, however, most of conventional assistance devices were attached some motors and very bulky. On the other hand, RE-Gait® utilizes the bi-articular muscle structure and physiological phenomenon of the stretch reflex of the human (according to the condition of the user, the mechanism is different) at the moment of detaching from the ground, RE-Gait® can induce raising the foot only assisting the ankle joint motion as shown in Fig. 2.

Fig. 2 Mechanism of raising the foot only assisting ankle joint

In the attached parts, to be able to hidden in the pants inconspicuously as show in Fig. 3, we developed very low profile gearbox, the thickness is only 2cm. In this gear box, the multiple thread worm and the helical gear are meshed and high efficiency and self-lock less are realized. The frame is made of the carbon fiber, therefore the total weight is about 1kg equivalent to a conventional AFO (ankle foot orthosis) which is used by patients in daily life.

Fig. 3 Compact design enable to hide in the hem of the pants

On the other hand, the field of using RE-Gait® is a hospital and a care house, so it is necessary for the professional people of medical doctors or physical therapists to be able to tune RE-Gait® immediately according to the condition of patients. Therefore we developed the tablet software which can tune RE-Gait® easily by them as shown in Fig. 4. This software can indicate the targeted angle variation of the ankle joint visually, both the tuned staff and the patient can recognize the motion of RE-Gait® before training. This software can set various values, e.g. the walking cycle, sensitivity of the sensor, the shift timing from stance phase to swing phase, and these data can send to RE-Gait® wirelessly. 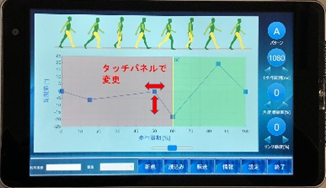