1. Description of the Product

2. Description of the Technology

The conventional rebound hardness test has difficulty having an indenter ejected by itself, therefore the indenter must be fixed on the tip of a metallic object that can be ejected. For this reason, even if the indenter alone is light, the whole indenter assembly hit against a specimen can weigh several dozen grams. Because such an indenter assembly suffers a loss of energy originating from vibration and other reasons when it hits a lightweight specimen, the coefficient of restitution, or hardness, of the specimen measures lower than actual. This is known as the “mass effect.”

To reduce the mass effect, reducing the weight of the indenter assembly is indispensable. Although it was realized only in the laboratory, an impact hardness test developed in 1987 adopted a mechanism to impact a small ball alone against a specimen. However, this tester was not commercialized because it was a stationary machine only usable for upward testing applications.

2.2 Small ball rebound hardness tester eNM3A10
The commercialized eNM3A10 tester hits an alumina ball alone of 3 mm in diameter and 0.06 g in mass against a specimen; measures the indenter ball velocity before and after it hits the specimen with a sensor; and calculates and indicates the coefficient of restitution. The test is completed instantaneously and does not require measurements of the indentation or any preliminary adjustments. Due to no variability between individuals, anyone can perform the test easily and with high accuracy. To ensure on-site safety and convenience, the tester is structured to prevent outer ejection of the ball indenter. In addition, once the tester completes a test, it can be reset easily to start another.

The ball indenter is held in a suitable manner to enable tests in all directions, including upward and downward. The test surface of a specimen needs to be #600 paper polished to ensure accurate measurement, but even #100 paper polish could achieve a near accurate coefficient of restitution with an error of some 2%. To accommodate the need to test complicated faces other than flat, the tester can be combined with an adapter for testing round bars and narrow portions. In addition to metallic materials, the eNM3A10 tester can test a wide range of materials, including wood, plastics and even food. Moreover, although still in the development stage, the tester could be used at temperatures from -196 to 1000℃, because it can complete a test instantaneously. Indeed, the eNM3A10 tester has great potential. 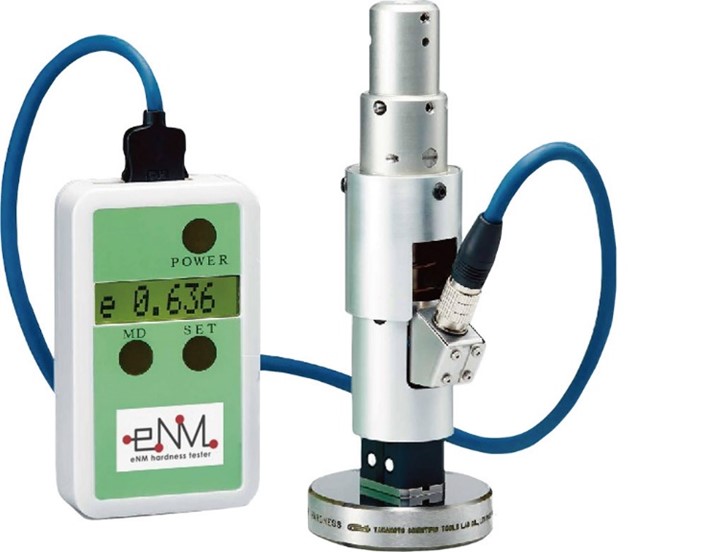 The tester enables you to test the hardness block of 64 mm in diameter and 380 g in mass (as in the photo), either on a desk or held in the air with one’s hand.

The eNM3A10 small ball rebound hardness tester has been developed by a team of researchers who are interested in the project from various companies, universities and national research institutes. The team continues to work on the development of a tester with less mass effect.