A Japanese second asteroid sample return probe “Hayabusa2” was launched in 2014 and arrived at the vicinity of asteroid 162173 Ryugu on June 27th, 2018. During its 1.4 years asteroid proximity phase, the mission gained scientific insights towards revealing the origin of the Earth, ocean, and life. In addition, the probe accomplished its mission more than expected including seven world’s first achievements including the investigation of asteroid’s sub-surface. Since the surface materials on such small bodies are affected from space weathering, the scientific observations and sampling of substances beneath the surface are the major concern for the planetary science to investigate primitive materials memorizing the ancient events of our solar system. Therefore, the authors have used newly developed small carry-on impactor (SCI), small deployable camera (DCAM3), and exploiting unique remote operation as well as autonomous robotic techniques not only to create an artifitial crater on the asteroid surface but also successfully observed the entire forming process for the first time in history. As a result, Hayabusa2 have established a novel means of investigation on unexplored celestial bodies.

The technology of Hayabusa2’s underground investigation consists of two core parts: the forming and real-time observation of an artifitial crater using “small carry-on impactor” and “deployable camera”, and the combination of robust remote operation and the autonomous robotics.

SCI is a cylindrical component which has a diameter of 300mm and a mass of 14kg. The detonation of explosive filled inside the cone-shaped casing will deforms the copper liner into a bullet shape to inject toward the asteroid surface. The liner is made of pure copper which is easy to be deformed as well as to distinguish with the natural materials from the asteroid. Therefore, SCI greatly satisfies the needs of sample return mission. The “Deployable Camera 3 (DCAM3)” is a deployable optical camera developed to capture crater forming process during the impact experiment. DCAM3 possesses a low resolution analog optical camera which is capable of real-time wireless image transfer as well as a high-resolution digital camera which is capable to capture and transfer single image per several seconds, and they are implemented independently. DCAM3 also has cylindrical shape which has a diameter of 80mm as well as its height of 80mm, and the mass is only 580g. DCAM3 is deployed after the deployment of SCI during the escape sequence of the mother spacecraft. DCAM3 will monitor the entire forming process of an artifitial crater on behalf of the mother spacecraft from the side as described in Fig. 1. The obtained analog and digital images are transferred immediately to the mother spacecraft which is already evacuated behind the asteroid where it cannot observe the experiment directly. 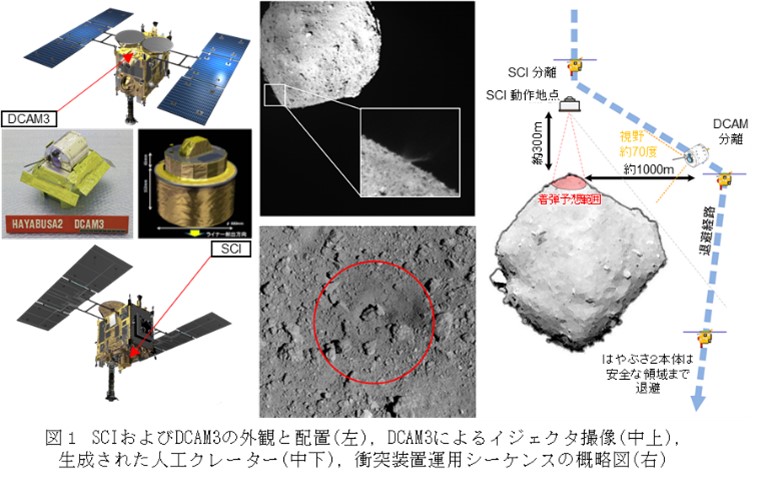 The target body of Hayabusa2, “Ryugu”, orbits around the Sun keeping its Earth distance from 0.24 billion km to 0.35 billion km during the asteroid proximity phase, and the one-way light time to Ryugu from Earth becomes up to 15min in April 2019 during the impact experiment. Thus, remote operation cannot be applicable for controlling spacecraft motion in small time frame. Therefore, Hayabusa2 inherited the combination of the remote operation and the autonomous operation from its predecessor “Hayabusa” spacecraft and developed further to fit to the impact experiment which is unique to Hayabusa2 mission. The remote operation continues until the altitude of 500m, and the later spacecraft sequence from SCI separation to the completion of evacuation was designed as autonomous sequence (Fig. 1). To make this complicated entire operation reliable and robust, the authors referred to the idea of agile development and created an “iterative operation planning process” to obtain robust and reliable operation design and procedures. Firstly, the Hardware-in-the-Loop Simulator (HIL) which is electrically compatible to the actual flight model of the Hayabusa2 and conducted real-time operation training before the asteroid arrival. During the 1-year concentrated training sessions, the operation team extracted as much issues as possible to modify the operation procedures and the spacecraft settings iteratively. Once arrived at the asteroid, newly revealed properties of the asteroid were reflected immediately to the operation procedures and spacecraft settings. Due to these iterative processes, the quality and robustness of operation procedures and spacecraft settings were kept in high level, and the operations team could take enough time to concentrate on the thorough tuning of parameters used for autonomous operation based on the actual flight data.

Synthesizing the above technologies and techniques, the authors conducted impact experiment on Apr. 5th, 2019. The SCI detonated at 250m altitude above the asteroid surface, and the series of images during the ejecta soaring process were captured from the DCAM3. As a result, the artifitial crater with its diameter of 10m and its depth of 3m was successfully formed (Fig. 1). The positional error of the impact was only 20m. Following the detail terrain mapping and the investigation of scattered materials, Hayabusa2 has accomplished its landing and sampling near the artifitial crater. This was the world’s first successful sampling from the small body’s subsurface.