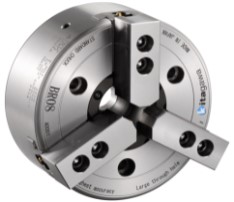 When gripping the work, the internal parts of the chuck are subjected to dozen tons of load. By devising the shape of these parts, the BR chuck suppresses elastic deformation and stabilizes the position of the internal parts, thereby improving the gripping accuracy, suppressing the work lift, and suppressing the gripping force loss due to rotation. Fig. 3 shows the conventional type, and Fig. 4 shows the BR type master jaw. Since the BR type has a wide wedge, elastic deformation due to load becomes small.

Fig. 5 shows the cross-section of the conventional type and Fig. 6 shows the cross-section of the BR type chuck . In the conventional type, elastic deformation of a shape similar to the rice ball shape is observed in the chuck body. This is due to the load generated from the plunger towards the outer circumference.  While in BR type, the load is dispersed, resulting in considerably small elastic deformation. 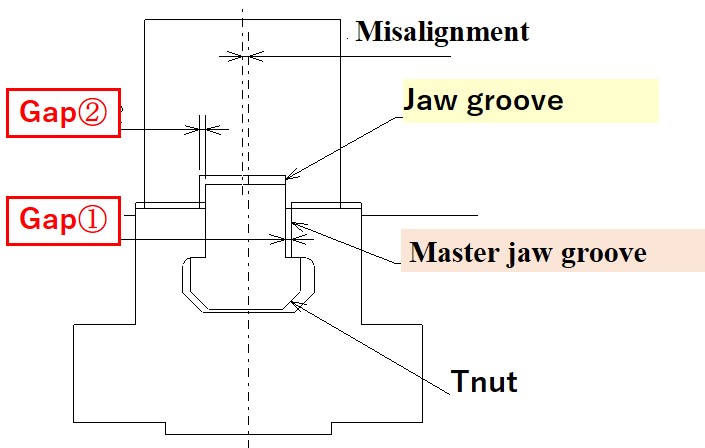 The side surface of Tnut-Plus contains anomalous recesses. The width of these recesses is smaller than the groove width. Also, the contact part with the groove has a misaligned positional relationship (Fig. 8) that allows the Tnut-Plus to be inserted into both grooves with a slant. (Fig. 9) When tightening the bolt in this state, the jaw is forcibly straightened by the meshed serrations. The two grooves and Tnut-Plus interfere slightly, creating zero gaps. (Fig. 10)

This technology is an innovation that breaks the common sense of power chuck over half a century. We are confident that we will immensely improve the quality and productivity of lathe machining and support the foundation of manufacturing.