Fiber reinforced plastic (FRP), which is being developed as a key material for weight reduction and high strength in various industries, has a wide variety of manufacturing methods that depend on the combination of fiber reinforced configuration and resin type. In addition, preliminary examination of manufacturing conditions has been strongly required for adapting automation of the manufacturing process to achieve both high cycle and low cost. However, for FRP sheet and discontinuous long fiber FRP, simulation technology that can predict the defects and forming pressure has not yet been established, due to the complexity of material behavior during manufacturing. Therefore, we constructed a finite element modeling technology that can predict the wrinkles, which is a typical defect of FRP sheet, and the material behavior and forming pressure during compression molding. We have also developed a simulation software “J-Composites®” for simulating complex FRP manufacturing processes and process chains.

Wrinkles are well known as a typical defect during forming of continuous fiber FRP sheets. In order to accurately predict wrinkles, it is important to consider both the in-plane anisotropic and the out-of-plane bending characteristics in the simulation. On the other hand, since the continuous fiber FRP sheet has a complicated structure, its out-of-plane bending characteristics cannot be calculated from the in-plane characteristics of compression and tension. So, we proposed the shell-membrane hybrid model for composite forming simulation to deal with the decoupled bending stiffness. In this model, in-plane properties can be described by the membrane element and the out-of-plane bending stiffness is represented by placing shell elements on both sides of the membrane element. By expressing the flexible out-of-plane bending behavior and the in-plane behavior independently, it is possible to accurately predict the material behavior during forming, including the occurrence of wrinkles 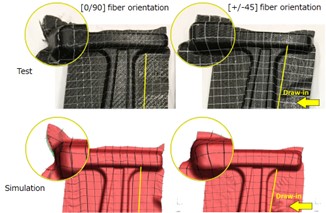 Discontinuous fiber FRP not only has a high freedom of design to form complex shapes such as ribs, but also has mechanical strength comparable to continuous fiber FRP when the fiber length exceeds 25 mm (long fiber). Compression molding is used to form the discontinuous long fiber FRP. However, during the compression molding process fiber orientation, weld lines, and matrix rich regions greatly affect mechanical strength. We developed new compression molding simulation techniques to accurately predict deformation of discontinuous long fibers. Long fibers are modeled by beam elements and matrix resin is modeled by tetrahedral solid elements with a re-meshing function. Deformation of the beam and solid elements is calculated using a coupling method including a friction model. The friction model reproduces some resistive force generated as fibers move through the matrix resin. Figure 2 shows the result of a molding test and simulation of discontinuous long fiber FRP. Fiber orientation and resin rich regions are evaluated easily from the beam elements and weld lines are reproduced accurately. 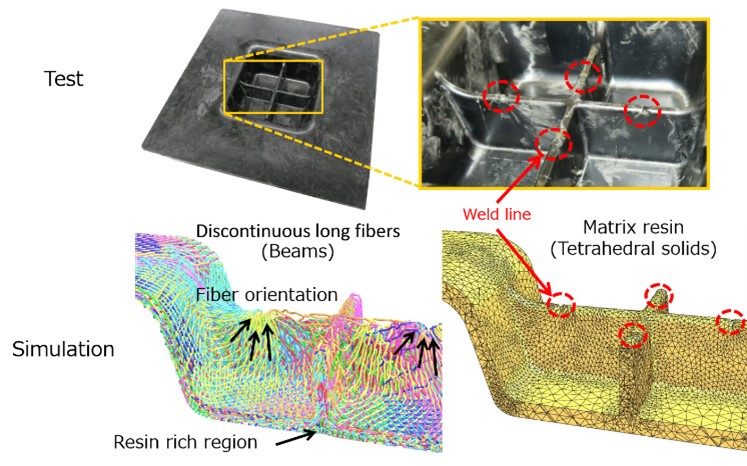 The new analysis technologies have been implemented in a commercial simulation software “J-Composites®” released from JSOL Corporation. “J-Composites®” has been used by some automotive, heavy industry, and material manufacturing companies for research and development. We expect that the technologies will accelerate the mass production of FRP products in the future.