The heat pump, which is the principle of air conditioners, is expected to be widely used in larger capacity heat utilization systems toward the realization of carbon neutrality as an energy-saving technology that can effectively utilize the heat of the earth. The compressor, which is an essential part for heat pump, is also strongly required to have a large capacity. To meet thesedemands, we have developed the world’s first three-cylinder rotary compressor with an increased number of cylinders from the conventional two to three. The maximum capacity of this compressor is one of the largest in the world for positive displacement variable speed models. In addition, by distributing the flow rate and load per cylinder, high efficiency was obtained in a wide operating range and a remarkable vibration reduction effect was obtained compared to the conventional two-cylinder model.

As shown in Fig. 2, three cylinders are arranged in the axial direction, an angle formed by the eccentric directions of cranks of the crankshaft is set to 120° each, and compression is performed three times per rotation   . As a result, the vibration can be reduced despite the large capacity by significantly reducing the rotational torque fluctuation compared to the conventional two-cylinder compression. Fig. 3 shows an example of theoretical calculation of the torque fluctuation rate of a conventional two-cylinder rotary and a three-cylinder rotary assuming the same suction volume. The torque fluctuation range of the three-cylinder is reduced to about 30% of that of the two-cylinder. 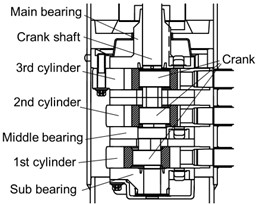 As the flow rate of the refrigerant increases in the rotary compressor, the flow path loss increases significantly due to the presence of the discharge valve at the discharge port, which is the main cause of efficiency deterioration. Therefore, as shown in Fig. 4, we have developed a multi-discharge structure, in which discharge ports are provided on both the upper and lower sides of the cylinder, the cross-sectional areas of the two ports are intentionally made different, and the responsiveness of the two discharge valves is also different.

Fig. 5 shows the results of actual measurement of the behavior of the discharge valves at large flow rate and small flow rate. Thanks to the different responsiveness of the two discharge valves, overcompression loss and flow path loss can be effectively suppressed, and efficiency can be improved over a wide operating range. In addition, the noise reduction effect is obtained by reducing the discharge pulsation. 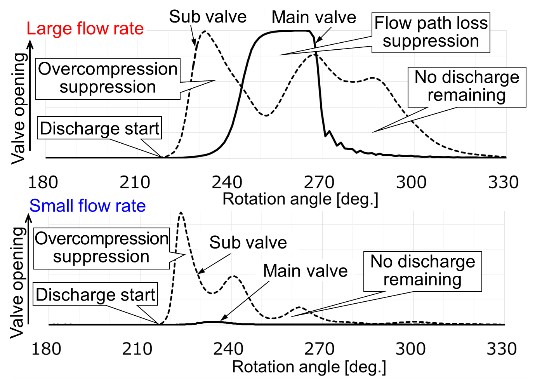 We have developed the industry’s first open winding motor system that drives one large output motor with two inverters to cope with the increase in the capacity of the compression section. This system can increase the applied voltage by about 1.7 times and can operate up to the high load range without deterioration of efficiency. In contrast, in the low load range, the loss was suppressed by driving with one inverter, enabling high-efficiency operation in the entire range.

The developed model is installed in a multi-air conditioning system for buildings, and the number of compressors in the outdoor unit is integrated into one, contributing to the miniaturization and large capacity of the system, as well as energy saving and resource saving. We would like to contribute to the development of heat pump equipment by using the developed compressor to further increase the capacity and expand the operating temperature range.