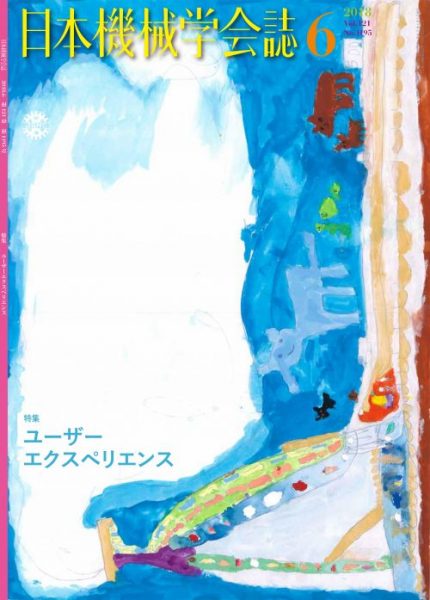 The authors propose an absorber that generates electrical power in order to not only suppress vibration but also get electrical energy when many traffic signal poles are oscillated by wind, traffic turbulence. The absorber consists of a displacement magnifying mechanism by using levers, solenoid coils and rare-earth magnets. It is useful for small deformation between a beam and a column of the traffic pole. Vibration modes of the pole are analyzed by using FEM, and then a small scale model of the traffic pole is built up. The small scale model has 2.7 m high, consists of a steel column and a cantilever beam due to rescale about 1/3 times of a real scale model, and the natural frequency of first mode is arranged to 3.5 Hz. Trial absorber is manufactured and a damping force, which is caused by the coils crossing magnetic field, is adjusted. Dynamic characteristics of the trial absorber are measured by a shaking actuator. In order to confirm vibration reduction and energy conversion, harmonic vibration test of small scale model when the trial absorber is installed is carried out by using a shaking table. The experimental results of the harmonic responses are compared with the calculated results which are derived by FEM. Effect of vibration suppression and efficiency of generating electrical power are evaluated experimentally and numerically.

In biomechanics of the knee joints, the definition of the cruciate ligament adhesion areas is discussed for the cruciate ligament reconstruction. Effective information can be expected to be fed back to the cruciate ligament reconstruction if accurate movement of the natural knee joints can be analyzed. Therefore, this study performed in vivo six-degree-of-freedom （6-DOF） motion analysis for the natural knee joints with high precision using an image matching technique. The image matching technique was performed determining the strength of correlation between the X-ray images from a single-plane flat panel detector （FPD） and the computational simulated image from three-dimensional gray-scale model reconstructed using computed tomography （CT）. Average root mean square errors of this technique were 0.84 mm for the in-plane translation, 0.17 mm for the out-of-plane translation, and 0.29 degrees for the rotation. We report analysis results for the natural knee joints in squat activity using this technique. Subjects were the natural knee joints of four healthy men. We assessed the four items for the motion pattern and the functionality of cruciate ligament. The roll-back motion of subluxation in high-flexion, and the importance of anteromedial （AM） bundle and posterolateral （PL） bundle in the anterior cruciate ligament （ACL） could be confirmed from the results. From these, this highly accurate technique can be expected to become a valuable tool for the medical device development and the diagnostic in field of orthopedics.